This doc is lifted from Kubernetes github-workflow. 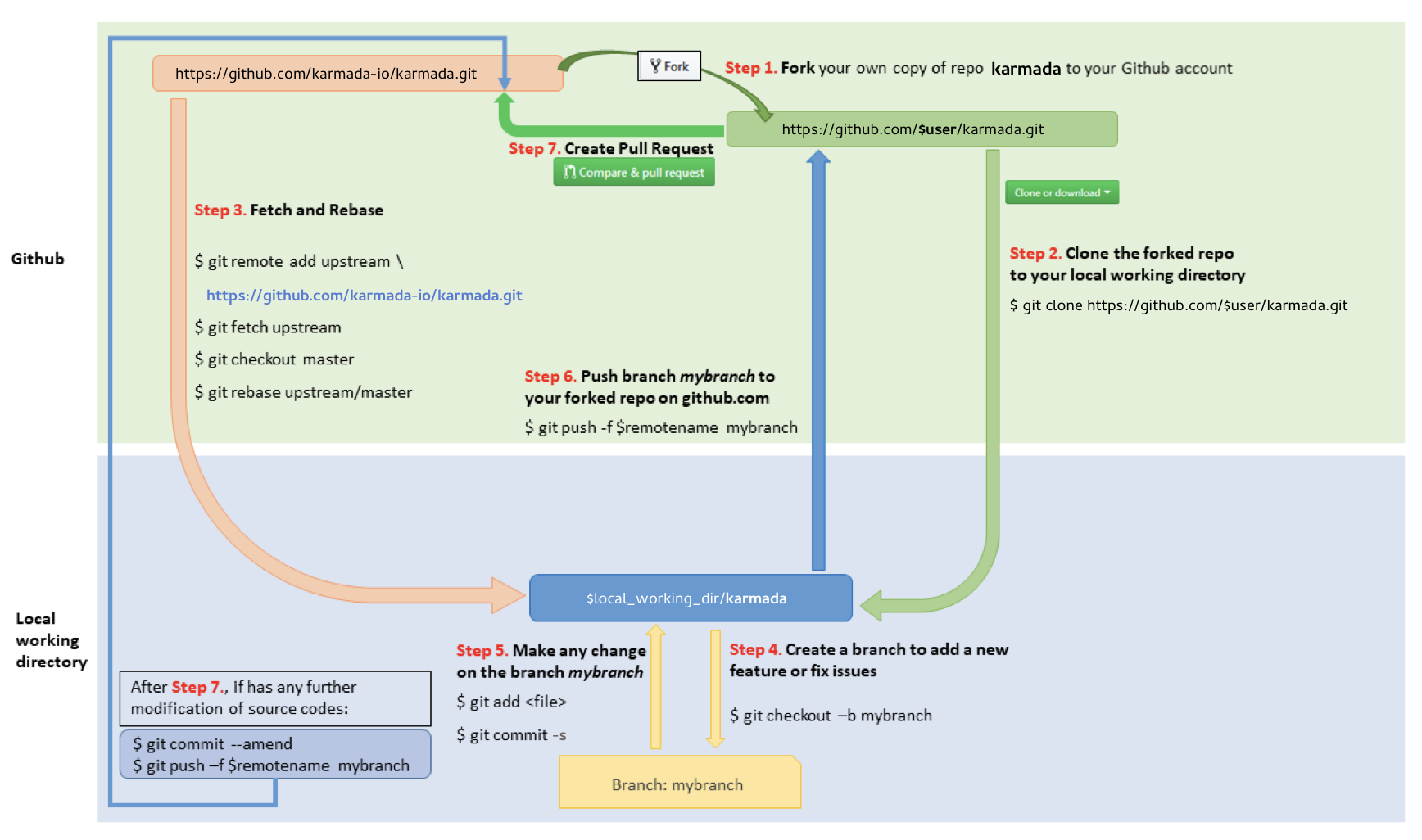 1 Fork in the cloud​

Both $working_dir and $user are mentioned in the figure above.

Get your local master up to date:

Then edit code on the myfeature branch.

4 Keep your branch in sync​

Please don't use git pull instead of the above fetch / rebase. git pull does a merge, which leaves merge commits. These make the commit history messy and violate the principle that commits ought to be individually understandable and useful (see below). You can also consider changing your .git/config file via git config branch.autoSetupRebase always to change the behavior of git pull, or another non-merge option such as git pull --rebase.

Likely you go back and edit/build/test some more then commit --amend in a few cycles.

When ready to review (or just to establish an offsite backup of your work), push your branch to your fork on github.com:

If you have upstream write access, please refrain from using the GitHub UI for creating PRs, because GitHub will create the PR branch inside the main repository rather than inside your fork.

Get a code review​

Once your pull request has been opened it will be assigned to one or more reviewers. Those reviewers will do a thorough code review, looking for correctness, bugs, opportunities for improvement, documentation and comments, and style.

Commit changes made in response to review comments to the same branch on your fork.

After a review, prepare your PR for merging by squashing your commits.

All commits left on your branch after a review should represent meaningful milestones or units of work. Use commits to add clarity to the development and review process.

Before merging a PR, squash the following kinds of commits:

Aim to have every commit in a PR compile and pass tests independently if you can, but it's not a requirement. In particular, merge commits must be removed, as they will not pass tests.

To squash your commits, perform an interactive rebase:

For mass automated fixups (e.g. automated doc formatting), use one or more commits for the changes to tooling and a final commit to apply the fixup en masse. This makes reviews easier.

Once you've received review and approval, your commits are squashed, your PR is ready for merging.

Merging happens automatically after both a Reviewer and Approver have approved the PR. If you haven't squashed your commits, they may ask you to do so before approving a PR.

In case you wish to revert a commit, use the following instructions.

If you have upstream write access, please refrain from using the Revert button in the GitHub UI for creating the PR, because GitHub will create the PR branch inside the main repository rather than inside your fork.